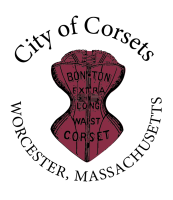 World War I
through the Great Crash of 1929

Second marriage to William Bowne and a retail venture

Clergyman Austin S. Garver conducted a marriage ceremony for Mary and her second husband William Rainear Bowne in Worcester on March 22, 1917. Bowne, born in Bordentown, NJ (May 21, 1878) entered the U.S. Naval Academy as part of the class of 1901 but left after one year there. He proceeded nonetheless with a naval career, noting the rank of commodore in various sources. The 39-year-old widower married the 41-year-old divorcée who, strangely, filled out the occupation line on the certificate as “at home.”
I’ll bet Mary was anywhere but “at home” during these years. She had another idea that probably helped Ivy Corset last as long as it did. The big motion picture studios had already figured out that owning movie theaters was the ticket to success. The theaters you owned would play your product, no negotiations involved. With the same end in mind, Mary filed articles of incorporation for United Corset Shops, Incorporated in Massachusetts in April 1917. Listed on the paperwork as one of the incorporators was Mary’s brother-in-law Charles Deering.
United Corset Shops stayed in business for decades, closing only three years before Mary’s death in 1964. That is a very long run for a company founded on the eve of a world war. There was also a chain of stores called Ivy Corset Shops, Inc. that sold “exclusively Ivy Corsets;” I have not been able to determine the difference between it and United but it is clear that both were Ivy Corset retailers. Owning a nation-wide chain of shops that carried Ivy Corset products largely removed the need for a travelling sales force that had to gladhand their corsets into the downtowns of America.

Another change to the business in 1917 was its name. On April 6 — the day the United States entered World War I — Corset H officially became the Ivy Corset Company. Mrs. Mary H. Bowne was president and treasurer of the corporation. In June of that year, tall, medium build, brown hair, black eyes, not bald Allison Heintzelman registered for the military draft. His days cutting out Ivy Corset patterns and sweeping up floors at the the corset factory had ended.
Although the war waged on, Mary’s ambassador at networking events and Ivy’s most publicized salesman J. J. Ready participated in a 1918 outing of the Empire State Corset Club at the Hotel Onandaga in Syracuse, NY.  We read that at that event “Jack Ready, the fleet-footed catcher for the ‘Slow Deliveries,’ gave J. Franklin Baker, the Home Run King, a close rub when he drove the ball so far that it has not stopped going yet. It was headed for ‘Somewhere in France.’ The boys in the trenches are welcome to it.” Presumably Mr. Ready had received some official exemption from war service although the factory was probably feeling the loss of many other male employees during these years, in addition to the downturn in revenue that many industries endured.    Assuming that the war would end eventually, Ivy Corset continued its advertising.  Its “woman at the helm” emphasis must have been effective.  We see it again in a Los Angeles newspaper:
“The great secret back of the unusual features and popularity of Ivy Corsets is the fact that there is a woman prominently at the head of the Ivy Corset Company — a woman who knows women and the needs of women — a woman of rare experience, with a highly cultivated knowledge of corset lore — and it is this knowledge together with her artistic skill that is brought to bear on the designing of Ivy Corsets — to their present perfection.”

World War I ended on November 11, 1918. Allison’s name appeared on an April 1918 muster roll for the U.S. Army and again in September 1918 on a list of “privates first class” then posted at Camp Zachary Taylor in Kentucky. I don’t know if he saw active duty and there is little evidence of his whereabouts for the ten years following the war. He returned to Worcester for a couple of years; in 1920 he worked as a salesman for uncle Charles Deering’s Deering Corset Company (69 Mechanic Street) then disappeared from any public records until a 1930 U.S. Census document finds Allison Heintzelman, single, a lodger on Willoughby Avenue in Los Angeles. For his “industry” answer he wrote: “cloth factory.”

Did he miss the Worcester factory days? If so, it wasn’t for long as his corset factory to cloth factory transition was short-lived. A year later on his marriage license to Mary Jane Lindley in Orange County, California, he described his job as “golf instructor.” By the 1940 Census he had changed jobs again and was then selling real estate in the city of Los Angeles, living with his wife, her widowed mother, and a 6-year-old daughter Mary. It appears that he spent the rest of his life in Los Angeles, dying there on Valentine’s Day 1979. In tribute to the long-held notion that in California you can endlessly re-invent yourself, Allison’s death certificate says his last profession was “ice distributor.”

Back east, the Minimum Wage Commission in Massachusetts had reconvened after the war and published another report on the corset industry in 1919. Representing the employers for the Corset Wage Board were Albert Darling, John Linehan, and Henry Hayes (a former Corset H official); all three men owned Worcester corset factories. “It should be remembered,” the commission wrote, “that the corset industry was seriously affected by war conditions; that the period covered by the study was one of transition from a war to a peace basis.” Their recommendation: “A cost of living budget of $13 a week was adopted as the minimum required to maintain in health a self-supporting woman in the occupation. This amount was recommended as the minimum rate for an experienced woman, with rates of $8 and $10, respectively, for minors and inexperienced workers.” To put those numbers in perspective, in nearby Boston during these years most renters paid between $1200 and $1500 a year for an apartment which is well over $100/month. Even at the reduced rates of a rental in Worcester, a $13 per week wage was not going to make a significant contribution to that monthly expense.

The 1920 U.S. Census showed evidence of a prospering Ivy Corset Company with Mary and William then living at 36 Elm with two servants listed on the Census: 27-year-old Julia Purcell and 66-year-old Gertrude Corbin. During the 1920s, her brother Signor listed a job at printing company Puritan Linotype in Cambridge, Massachusetts; by 1937 he is described as the business’ proprietor. He died in Cambridge in January of 1940.

In August of 1920 women got the long-awaited right to vote, a milestone for gender equity in the United States. Business appeared to be booming for Ivy Corset. The company participated in trade shows, among them an elaborate staging of the Atlantic City Boardwalk at Boston’s Mechanic’s Building, a fund-raising event attended by thousands of people. The main category of press coverage for Ivy Corset during this decade was news of its store openings.

We read of an Ivy Corset Shop opening in Syracuse, New York:

“This newest home of the Ivy corset, the design of a woman and made in ninety-seven different models, is up to date and complete in every detail. The ﬁtting rooms are tastefully furnished, and the soft light from the indirect system harmonizes with the general color scheme and atmosphere. Attractive show cases and comfortable easy chairs are features of the shop.”

Another opened in Washington, D.C.:

“one of the chain stores operated by the Ivy Corset Shop Company, has opened for business at the corner of C and 13th streets, N. W. The interior of the new establishment is finished in ivory, with decorations and ﬁttings to harmonize, and the entrance to the shop is ﬂanked by growing ivy plants on either side.”

“It is reported now that a rental higher than the record established last week for 5th Avenue space is to be paid for the twenty-four-foot store at 615 5th Avenue, taken for three years by the Ivy Corset Company, which will occupy the southerly half… ”

The company continued to look far and wide for qualified employees, for example:

In 1926 phone service arrived at 36 Elm Street.  Anyone with a telephone looking for Mrs. Bowne at home could dial Cedar-78.  But as the future arrived, the past started to fade away:  95 year-old “corset king” David Hale Fanning died in January of that year.

Retired from Business Three Days Ago at Age of 95.

Worcester, Jan. 21 — Funeral services for David Hale Fanning, “Corset King,” for 65 years head of the Royal Worcester Corset company, from which he retired last Monday to spend only three days in retirement before death called, will be held Saturday morning at 11 o’clock from the First Unitarian church,….

Mr. Fanning died suddenly this morning at his home, 150 Woodland street. He was 95 years old.

…The venerable manufacturer who for years had dictated the styles in corsets for the entire feminine world, passed away without pain as one sinks into sleep. Death was due primarily to the infirmities of old age…

Mary would certainly have attended this funeral, joining a “who’s who” of the American corset industry on a cold clear January day, to say good bye to the man who first brought her to town many years earlier.  She was by then one of those corset industry luminaries herself.  Her name had cachet, as evidenced by the focus of a display ad from the Hartford Courant in April of the next year.  “A woman better knows a woman’s need in corsetry,” it told us, and the woman behind these finally had a name in the advertisement:  Mary H. Bowne. 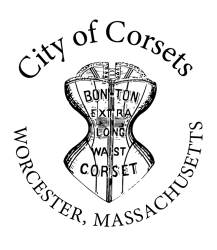 The City of Corsets Project is supported by: